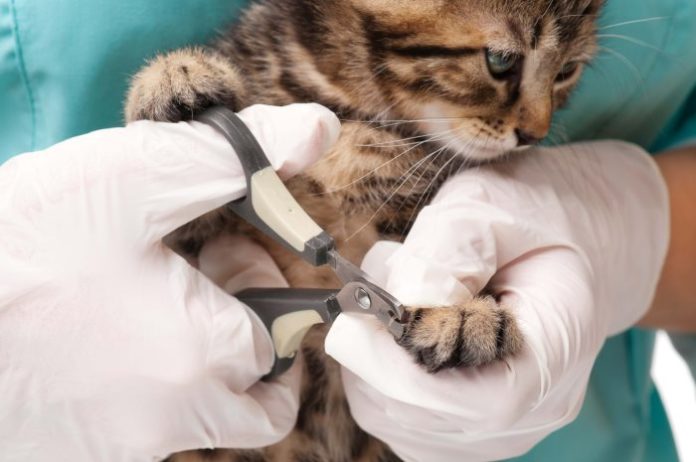 How to trim the claws of a kitten at home? Than to cut nails: usual or manicure scissors, tweezers, or guillotine. We will analyze the pedigree features of this process, if you started a sphinx, Maine Coon, British or Scottish kitten.

From what age to cut the claws of a kitten

In all the reference books for the care of pets it is recommended to cut the claws of the pet as necessary. How to determine that such a need arose? With dogs, everything is easier, if the claws knock on the floor or the fingers are moving apart – it’s time to cut. In relation to cats, the need is determined at the discretion of the owner.

Cutting the claws of a newborn kitten

Newborn kittens are born with eyes and ears closed, without teeth, but already with claws. Surprisingly, the claws of newborn kittens are sharp enough. As kids can not walk, they crawl along the litter, clinging to claws.

The cat’s nest with kittens must be covered with smooth fabrics, for which it is difficult to catch claws, for example, cotton, linen, chintz. If mammals are used as bedding, the kittens will cling to their claws, which is fraught with injury to their fingers.

The need to cut the claws of a newborn kitten occurs if you feed an orphaned baby. Being with her mother, even the kittens, who are in trouble, can count on help and support. Even if the cat can not release the baby by herself, she will mew and call for help. A similar situation with a kitten that was left unattended by the mother may result in trauma and hypothermia.

Grooming the claws of a kitten in 1-2 months

When the babies turn 1 month old, they begin to actively explore the surrounding world. During this period, the clipping of the claws is strictly not recommended, since the kittens learn to walk, keep their balance and control their own fingers. When a kitten runs or performs any maneuvers, he consciously releases claws or holds them in pads.

In 2 months the claws of the kittens remain sharp and grow markedly in length. Since at this age babies still eat mother’s milk, their claws can lead to trauma and irritation of the nipple’s skin. This is the only reasonable reason why a two-month-old kitten needs to cut off the tips of the claws. However, it is from 2-3 months of age that the kittens are recommended to start (rehearsals) to accustom them to claws.

How to properly cut the claws of a kitten – instruction

Many have heard that the procedure for cutting claws, can result in serious blood loss and severe pain. What you need to consider in order to properly trim the talons of the kitten? In each cat’s claw there are several bundles of nerve endings and many small blood vessels. In cats with light pigmentation, the keratinized part can be seen by “enlightening” the claw. A dark patch that repeats the claw contour is a pulp that can not be injured.

Advice: If your cat has dark claws and pulp is not visible, try to enlighten the claw with a flashlight. If the situation has not cleared up, when cutting the claws it is recommended to cut off only the tip.

To cut the claws was comfortable and painless, the tip is cut at an angle of growth. Roughly speaking, the cut line should be parallel to the location of the pulp. With vertical shearing, the cat may have problems with maintaining balance and peeling off the upper layers of the claws.

How to cut the claws of a Scottish and British kitten

A clipping of claws to a Scottish or British kitten is carried out in a standard way. Pigmentation of the claws depends on the color of the cat. In British with blue color, claws are most often gray and translucent with a flashlight. In cats with a dark color, the pulp is almost impossible to see, so claws do not shear, but dull. By the way, to reduce the discomfort of the procedure, you can use a nail file instead of a guillotine claw.

British and Scottish cats are characterized as moderately active animals. Even if you doubt that the need to cut the claws once will appear, do not be lazy to accustom your kitten to adequate behavior during the procedures associated with “manicure.” No animal is immune from grass and claw separation.

How to properly cut the Sphinx claws

The Sphinx has an obvious difference from its relatives – it lacks wool. Due to “visual metamorphosis”, the claws of hairless cats seem longer and longer. In fact, there are no differences and the clipping of the claws must be carried out only if the pet himself needs it.

If you have decided to shorten the kitten’s claws so that it does not spoil the furniture or scratch, it’s enough to saw only the tips. If you are determined to trim the claws of the ward, it is better to contact the veterinarian. Sphynxes are very trusted and attached to the owners, so the first, trial procedure should be conducted by an unfamiliar person.

Maine coons are considered to be the largest thoroughbred cats. The length and power of the claws of adult animals is impressive even by experienced owners. Maine coons remain kittens up to 1-1,5 years of age, so owners have a small handicap for training to mandatory procedures.

We will note that, regardless of the character and the expected size of the pet, it is necessary to learn it for the process of cutting the claws from an early childhood.

An adult Maine Coon, who is resistant to clipping, is in a position to severely injure both himself and the owner. To conduct similar procedures with cats of this breed, it is recommended to contact a veterinary clinic or grooming salon. If you cut the Maine Coon’s claws at home, be sure to enlist the support of one more person.

Than to cut a kitten claws

Suppose you have an urgent need to make a pet manicure. How to cut your claws yourself, without harming your pet? If you have a claw – the task is simplified. If the kitten has the first clipping of claws, and you do not have the tools, observing the security measures, you can use improvised environments.

The first thing that comes to the mind of an inexperienced owner is to cut the pet’s claws with ordinary scissors, but can this be done? Hypothetically, you can … if:

What can go wrong? The structure of the cat’s claws differs significantly from the human. When using conventional scissors for cutting the claws, the likelihood is too high:

Traumatized pet by ignorance? In such a situation, it is extremely important to quickly stop the blood and make sure that the wound is not infected. The injured claw will grow, after which it must be pruned. If the wound looks serious or the finger is injured, it is better to see a doctor. If there are no claws at hand, and claws need to be shortened, it is more reasonable to use a nail file or manicure scissors.

Nail scissors with rounded tips are suitable if you need not to cut your claws, but to blunt. Simply put, if you need to cut only the tips, so that the baby does not cling to the litter and does not hurt himself, you can wait for the purchase of claws.

Can I use clipping nippers?

Tweezers designed for cutting nails (in humans) – one of the most common tools that injured cats inexperienced owners. To painlessly shorten the claw of a pet, it must be cut at an angle. The blades of the tweezers are closed directly, and to put them under the right angle, the cat’s paw will have to be bent under an unnatural angle.

Again, if your pet has an exceptionally calm temperament and lies motionless in any posture during the procedure – the tweezers will do. If the pet paws, when the claw is clamped between the blades, it traumatizes. By the way, if you use tweezers, even veterinary, the pressure on the handles should be confident and sharp. Cutting the claw slowly and smoothly, you risk crushing it.

How to use the guillotine correctly

Bought kogterezy and do not know how to use them? Good news – the guillotine is easy to use, and the procedure becomes safe. The second news – the first time you probably will not succeed to cut all the claws.

To begin with, check the reaction of the pet by touching the guillotine to the claw. Click the claw and continue to follow the reaction. If the cat does not pull his paw – you can try cutting. Be sure to hold the pet’s paw with your free hand. Cut off only the tip (sharper) of the claw. Your movements should be confident and firm. The guillotine cuts the claw at an angle, so the pet should not be discomforted.

How correctly to cut the claws of the kitten for the first time, so that he is not afraid of the procedure in the future? You have only two options:

To address to the veterinarian or groomer – a minus of a method that the transportation in a carrying and carrying out of procedure in an unfamiliar premise is a serious stress. On the other hand, even if something goes wrong, the pet will not associate negative emotions with the owner.
Haircut claws at home – there is a high probability of injury and fright of the pet.

Since both options are not universal, the owners of beginners are recommended to consider the third alternative – the call of a specialist at home. Yes, in this case, the procedure will cost you a bit more, but you will be sure that the cat will not run into stress, due to a sharp change in the situation.

The optimal means is the purchase of a special bag for the care of cats – the bag is sewn so that it binds the movement of all the paws. By alternately unbuttoning the corners, you can release one paw and claw claws. The accessory is designed for bathing cats, cutting claws, cleaning teeth and performing other procedures in which the pet fiercely resists. 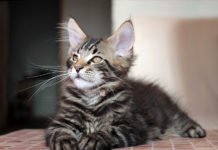 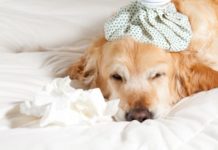 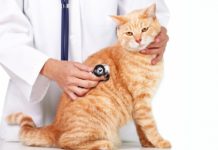 After sterilization, the cat has a lump on its belly