PETS - WIKI We Know Everything About Pets
Home publ Cats Heat (estrus) in cats: physiology
Facebook
Twitter
Google+
Pinterest
WhatsApp
Heat in cats is a natural process that doesn’t require any human control. All that is required from the owner is to monitor the status of their cat and not to miss possible symptoms of deviations from the norm. Attention and care of the owner is the best that can be done for the pet during this difficult period.

What changes are occurring with cats in heat?

Estrus or heat in cats includes three periods. Inexperienced owners are unlikely to determine what stage of estrus the cat is experiencing at the moment. However, a number of features allow quite accurately calculate the date of the heat beginning and the days favorable for mating days.
Proestrus is the name for preparatory phase, which lasts about two days. At this time, the pituitary gland secretes a hormone that stimulates the follicles. Estrogens produced in the follicles, prepare the cat’s body for mating and fertilization. Signs of estrus in cats during this period: clear discharge, loss of appetite, slight swelling of the genital mucous, some excitability. The cat demands owner’s and constantly meows. Some very active pets may leave marks, scratch walls and furniture. During proestrus the cat isn’t yet ready to mate, and therefore fiercely rejects all attempts of mating.

Heat discharge of a healthy cat is clear, without inclusions, of homogenous consistency. In case the discharge have a bad smell or is of red, yellow, pink, grayish or greenish color – you need to contact your veterinarian urgently.

Heat is a period favorable for mating. When cats are in heat and hormone level becomes high, female cats begin to actively entice males. The cat stops purring and starts making heart-rending sound, shakes its tail, rolls on the floor and wriggles. If you stroke the cat’s back, it will lie on the floor, lift the waist and move the tail aside. If the meeting with the male cat failed to take place the cat suffers, both physical and psychological. It literally shivers from the inability to follow the instinct, so punishing the cat for bad behavior during the heat is cruel. The duration of this period depends on the organism, but it is usually over in a week or even less.
Ovulation doesn’t occur in cats with no stimulation (a few pairings). During the mount the cat’s penis irritates the vaginal walls with its penile spines. This leads to the release of luteinizing hormone that plays a significant role in forming corpus luteum out of follicle. Progesterone produced by the corpus luteum prepares the uterus for embryo implantation.
First estrus in cats is often hardly noticeable and takes place without pronounced changes in the pet’s behavior. This is the norm, the body is getting used to this process. But sometimes heat may be poorly expressed in adult cats also, so that the owner doesn’t notice anything special. Many people consider it an advantage as there is no marks, yelling and rolling on the floor, but in this case it would be necessary to visit the veterinary clinic: low levels of sex hormones may be a symptom of a disease.
Interestrus – in case pairing and and ovulation, the female cat loses interest to the male, banishes it, may even become aggressive towards it. If mating didn’t occur the cycle begins anew after a while. If ovulation occurred, but fertilization failed to, the cat may fall into a state of false pregnancy.
Anestrus is a resting phase. Usually occurs during the winter months.

How many times a year does estrus occur?

If the cat doesn’t have breeding value, you should consider its being spayed. Bringing your cat torments not allowing it to mate or start breeding cats without having proper skills is extremely irresponsible of you towards the pet. However, spaying of cats in heat is highly undesirable without medical indication. It would be wiser to wait until the resting phase starts, and then to consult your vet.

Usually estrus lasts from two to three weeks. The period between estrus may be from a few days to six months. Prolonged estrus (longer than three weeks), rare estrus or its absence may be a symptom of a disease. Estrus in cats who give birth once a year and a half, happen less frequently than in females giving birth or having paired at least once. Therefore, the opinion that the cat should have a litter at least once “to improve its health” is absolutely wrong. On the contrary, such labors will only worsen the situation: estrus coming more often will exhaust your pet, hormonal swings will have negative impact on its health condition and the risk of reproductive system disease will increase.

At what age does puberty in female cats occur?

It is difficult to predict when the cat will have its first estrus. The average age of puberty onset varies from 5 to 12 months. Typically, the first heat in cat happens when its body almost reached its physiological maturity, and the body weight is about 70% by the normal weight of an adult animal. First estrus occurs earlier, if there is a male cat in the neighborhood, then in spring-summer period a female cat comes into puberty. The first estrus is more likely to occur earlier also in case your cat is a representative Asian breeds.
The first mating is recommended after the third heat. Early mating is hazardous to the cat’s health and life, as it can lead to serious diseases of the internal organs and to the birth of a non-viable litter. After the cat comes into puberty period the risk of reproductive system diseases increases. If breeding is not your aim, it is better to visit a veterinary clinic, where the vet will examine the level of hormones and decide whether to spay the cat. Spaying is recommended if the cat is in heat too often, is very active in this period and suffers from false pregnancies, and if congenial ovaries or uterus abnormalities are detected.

At what age cats stop going into heat?

The estrus duration in senior cats and the cycle duration mostly depend on the physical state of the pet. Usually with age estrus becomes shorter and the cycle longer. Cats don’t go into menopause, so estrus happens throughout the whole life. Hormonal fluctuations, pregnancy and labors over the age of 7 years are dangerous to health and sometimes may even threaten the life of your pet. 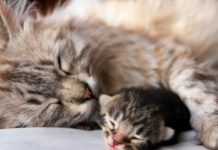 Signs of labor in cat 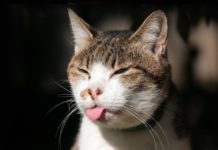 How much water do cats need? 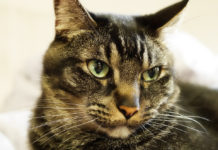